Developments in science leading to an improved tomorrow.
Leave a comment

Biomedical Engineering Occupational Outlook: How were the past 10 years?

Posted by nesbittb on February 21, 2013 in Occupation Outlook

Biomedical Engineering (BME) is projected to be one of the fastest growing fields from 2010 to 2020.  I have become increasingly interested in BME, which is why I decided to investigate the job growth and other important aspects related the career.

After my previous post which  looked at the Biomedical Engineering occupation’s projected growth, I started to wonder what the last ten years looked like in terms of job growth and salary. The Bureau of Labor Statistics (BLS) provides data each year regarding job growth.  I searched through the BLS databases and extracted some data regarding Biomedical Engineering.  The earliest information I could find about Biomedical engineering came from the 1999 Occupational Employment Statistics. The organization currently provides occupational and wage estimates up until their most recent data from 2011. 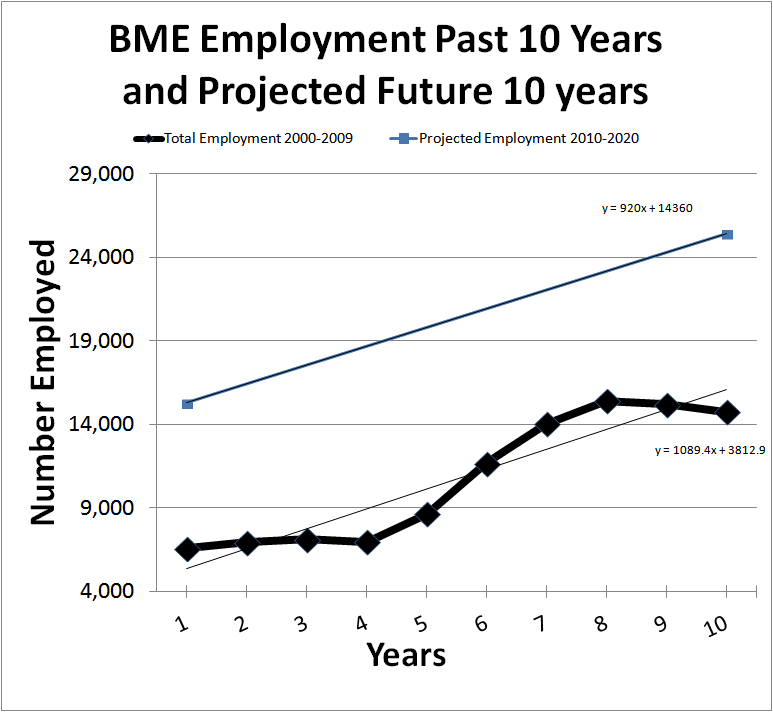 It is feasible that with steady economic growth,  the BME industry could grow at the expected rate. With increasingly awe-inspiring achievements such as the first FDA approved bionic eye and the woman who controlled a robotic arm with her mind, it wouldn’t be surprising to see job growth match the projected estimates from the BLS. BME is getting more attention and interest from researchers, investors, and governments who are interested in developing these technologies that can help improve peoples lives. For example, the United Kingdom has set aside £6.5 for prosthetics for soldiers involved in Iraq and Afghanistan.

Based on the data I have found about the past decade of BME and some of the information related to recent years of the occupation I feel relatively comfortable in choosing BME as a career field. So long as the economy grows steadily I feel that BME will be a strong choice for my future.